Addressing US-Jewish group, Minister Anwar Gargash says Abu Dhabi disagrees with Jerusalem on Palestinian issue, but is ‘decoupling the political from the non-political’ 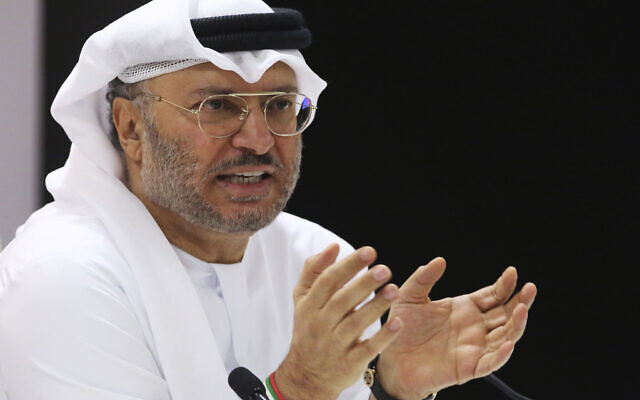 A senior official from the United Arab Emirates on Tuesday called for increased cooperation with Israel and explained his country’s ongoing rapprochement with Jerusalem, saying it wanted to separate disagreements over the Palestinian issue from the mutual benefits of cooperation in other fields.

Addressing a major US-Jewish online conference, Minister of State for Foreign Affairs Anwar Gargash reiterated his view that the decades-long Arab boycott of Israel has not yielded the desired results and advocated for “open lines of communications” and increased liaison with Jerusalem in various areas, such as technology and health.

His statements appeared to mark a significant turnaround from just days earlier, when a senior Emirati diplomat warned in an Israeli newspaper that annexation would spell the end of any rapprochement between Israel and the Gulf.

Gargash reiterated Abu Dhabi’s opposition to Israel’s planned unilateral annexation of parts of the West Bank, but underlined his country’s policy of “decoupling the political from the non-political.”

“Can I have a political disagreement with Israel but at the same time try and bridge other areas of the relationship? I think I can. I think that is fundamentally where we are,” Gargash said during an interview for the American Jewish Committee Virtual Global Forum.

Gargash, a member of the UAE’s federal cabinet, said there was no reason not to cooperate with Israel on efforts to bring medical aid to Palestinians suffering from the coronavirus pandemic. Such collaboration, which last week led to the second of two Emirati airliners landing in Tel Aviv, does not affect his country’s opposition to Israel’s planned annexation, he stressed.

The Palestinians oppose any attempts by the Arab world to normalize ties with Israel before a peace deal is signed. The Palestinian Authority has refused to accept the UAE supplies on the planes. 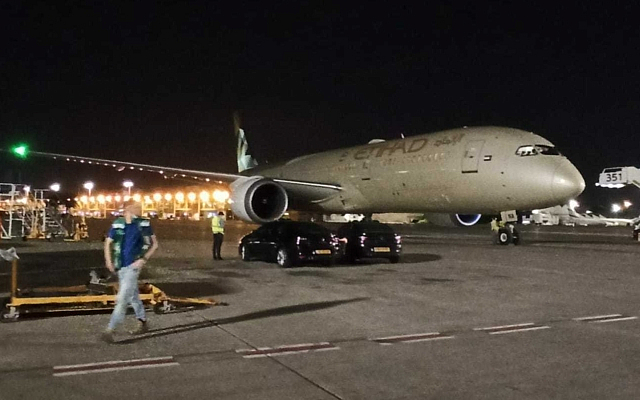 Gargash noted that decades of Arab hostility toward Israel has only bred animosity that now makes it harder to work together for the common good.

“The UAE is clearly against any annexation as is being proposed by the current Israeli government. Having said that, that is the political domain. Do I have to really look at all the other domains and make them almost static because of the political domain? We have tried that, as a group of Arab countries, over many years, and I don’t think it has really led to what we want in terms of bringing stability to the region,” he told the interviewer.

“I think we can come to a point where we come to a given Israeli government… and say, we disagree with you on this [annexation], we don’t think it’s a good idea, but at the same time there are areas, such a COVID, technology and other things, where we can actually work together.”

What we see today is that negotiations, and having lines of communications open, actually will yield better results for us and for the Israelis

The Emirates wants to promote stability in the Middle East where conflicting parties can resolve their problems on the negotiating table, Gargash went on.

“What we see today is that negotiations, and having lines of communications open, actually will yield better results for us and for the Israelis,” he said.

The traditional Arab policy of “stonewalling and closed lines of communications” has only radicalized the Israeli-Palestinian crisis, the senior diplomat added. 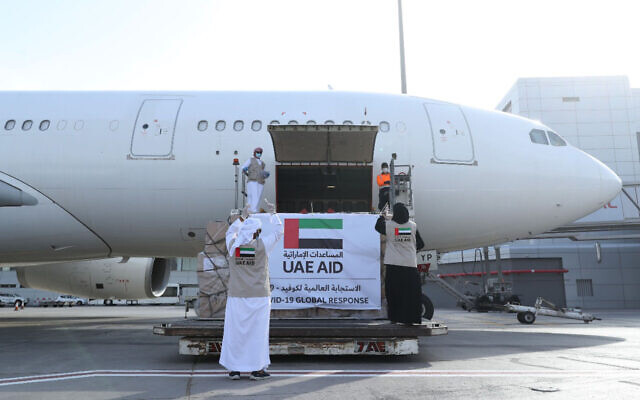 In this photo released by the state-run WAM news agency on May 19, 2020, an Etihad Airways flight with aid for the Palestinians to fight the coronavirus pandemic is loaded with its cargo in Abu Dhabi, United Arab Emirates. (WAM via AP)

Even disagreements about the Palestinian issue should not be dominated by fiery rhetoric, he said. “It needs to actually be addressed rationally and I believe that is the way forward…. Not speaking to Israel is just not getting us anywhere.”

Asked by AJC’s chief policy and political affairs officer Jason Isaacson about the invitation to Israel to participate in the Expo 2020 in Dubai (now postponed to 2021), Gargash said it was “the natural decision.”

The event’s major themes are tolerance, communication and regional harmony, and “you can’t come and send all these messages and say, I am not going to invite that single country,” he said. “It just doesn’t work. So it was logical for us to invite Israel to the Expo.” 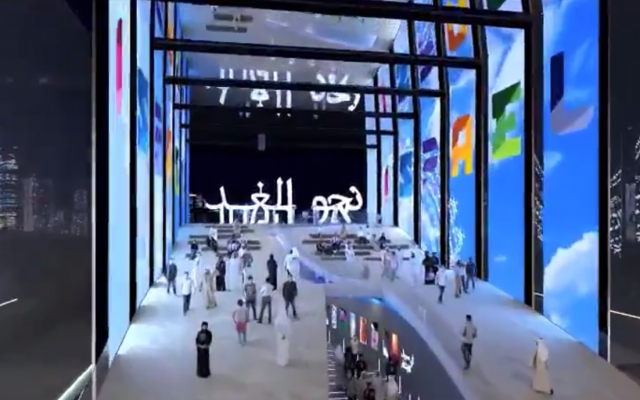 He added: “At the same time, this has taken place as part and parcel of decoupling the political from the non-political. It has taken years to do. And it has happened not only in the UAE but in many other countries around the region.”

During the 45-minute interview, which the AJC hailed as “a historic public appearance by a senior Arab government official before a global Jewish organization,” Gargash referred to Israel’s much-maligned plan to apply sovereignty over the Jordan Valley and all settlements in the West Bank three times. 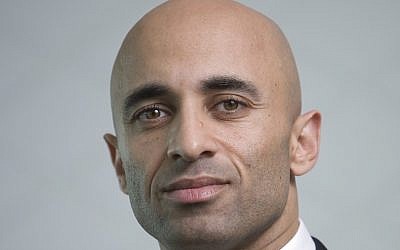 As opposed to the UAE ambassador to Washington, Yousef al-Otaiba, Gargash did not explicitly warn that annexation would spell the death of the recent rapprochement between Jerusalem and Abu Dhabi.

On Friday, al-Otaiba, also a minister of state, published an unprecedented Hebrew op-ed in leading Israeli daily Yedioth Aharonot in which he declared that annexation “will certainly and immediately upend Israeli aspirations for improved security, economic and cultural ties with the Arab world and with UAE.”

Gargash on Sunday refrained from echoing such threats, but he is on the record as staunchly opposed to annexation as well.

“Continued Israeli talk of annexing Palestinian lands must stop,” he wrote on his Twitter account earlier this month.

“Any unilateral Israeli move will be a serious setback for the peace process, undermine Palestinian self determination & constitute a rejection of the international & Arab consensus towards stability & peace,” he added.

Gargash is known to be one of the Gulf officials most open to normalization with Israel. In March 2019, he publicly called for a “strategic shift” in Israel-Arab ties, saying the Arab world’s decades-old decision to boycott the Jewish state had been a mistake.

Under a coalition deal between Prime Minister Benjamin Netanyahu and Blue and White leader Benny Gantz signed last month, the government can pursue annexation of all the settlements and the Jordan Valley — the 30% of the West Bank allocated to Israel under the Trump administration peace plan — from July 1. The Trump administration has indicated it will not oppose Netanyahu’s declared plans to do so, providing Israel accepts its “Peace to Prosperity” plan, which conditionally provides for a Palestinian state on the remaining 70% of the territory.

The Palestinians have rejected the US plan, and earlier this month said they had submitted a counter-proposal for a demilitarized Palestinian state to the Middle East peacemaking Quartet — the US, EU, UN and Russia.

Like most of the international community, the UAE has been vocally opposed to annexation.

“This unilateral step is illegal, undermines chances for peace and contradicts all efforts made by the international community to reach a lasting political solution in accordance with relevant international resolutions,” UAE foreign minister Abdullah bin Zayed Al Nahyan said on May 10.

Such suggestions “contradict the reality of the Arab position, as the Arab consensus is declared and fixed in the decisions issued by the League of Arab States and confirmed in many Arab ministerial meetings,” the UAE’s top diplomat affirmed at the time.

“His Highness affirmed that the path of the peace process in the Middle East, which we all aspire to, is clear and known and established by the international principles agreed upon to resolve the Palestinian issue and end the Israeli occupation of the Palestinian territories,” his statement went on.

Supporting The Times of Israel isn’t a transaction for an online service, like buying Netflix. Our Community is for people like you who care about a common good: ensuring that balanced, independent coverage of Israel and the Jewish world continues to be available to millions across the world, for free.